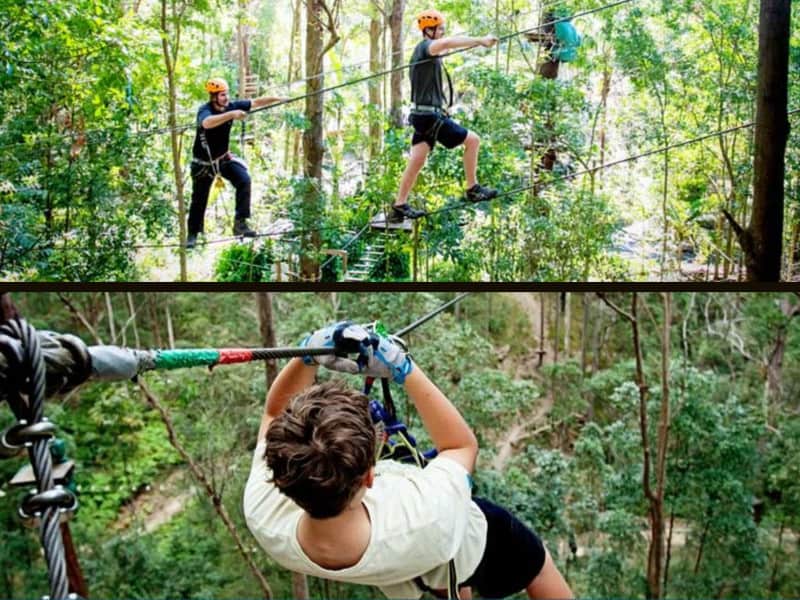 If you have a fear of heights, I’ve discovered the ultimate therapy. It’s called the Tree Top Challenge. There are multiple locations but my first experience was Currumbin Wildlife Sanctuary on the Gold Coast, Queensland. I’m thankful I started here because I later tried the Tree Top Challenge at Mount Tamborine which was a lot higher up the treetops. Currumbin Wildlife Sanctuary has a lot more to offer if you’re planning a family visit with members that are not so brave and want to experience everything the sanctuary has to offer such as Australian wildlife, Aboriginal culture, and a great family day out. The Tree Top Challenge was the most physically and mentally challenging thing I’ve done in a very long time. Not only did I learn that my fitness level had dropped to a sad low level, but my mental fitness fell short as well. The Tree Top Challenge offers 80 challenges, 11 of those are zip lines, also known as flying foxes. The most nerve-wracking is the Croc Shock where you zip line above crocodiles. My teenage children were excited so I plastered an ‘I’m excited too’ look on my face as I looked up in horror at the tree we were about to climb. We were given gloves and overalls to wear over our clothes and were fitted with a security harness. After a brief training video on how to navigate through the course we started climbing trees and got straight into walking on wire tightropes, wobbly bridges, black tunnels, Tarzan ropes and zip lines (flying foxes) all from a great height. I found myself constantly looking down… just to make sure my feet were behaving themselves.

I was able to handle most obstacles but came unstuck on the Tarzan swing. It was a combination of the height and the fear that my arms would not be able to bear the weight and although I was assured that the harness would catch me if I wasn’t able to hold on to the net on the other side, I just couldn’t bring myself to throw myself off the platform. I whined and carried on like a five-year-old much to the amusement of spectators and the safety staff below. As much as I thought of myself as adventurous and brave, this exercise made me realise that I had fears that were holding me back.

‘What’s the worst thing that could happen?’ called out the young safety officer below me. I could think of a few things but I kept my mouth shut, or maybe it was frozen shut with fear. Actually, I was thinking a broken neck and the rest of my life in a wheelchair… but I threw him a smile which I think probably looked more like I was baring my teeth.

I knew somewhere in the back of my mind that I would be okay, yet the fear was paralysing. I could not jump. I did not trust my arms to hold me. I was tired, my arms were aching, I was up high, and it all looked too hard. I noticed that I had attracted a crowd of spectators that found my fear amusing. I tried to laugh it off and play to the crowd. Now, there was the pressure of people watching me! My 13-year-old daughter was standing next to me. Her encouragement to get me to jump was turning into frustration as the minutes ticked on. I just couldn’t do it. I wanted out but out was not an easy option either. I was angry at myself for being scared. I wanted to be the strong inspirational mum that could do everything. Instead, I was a blithering mess making a big scene and whining like a child. I tried to be comical, to save face, but the truth was, if no one had been watching, I would have turned around and gotten off somehow and not jumped. Unfortunately, all the commotion I created had attracted a group of amused spectators who wanted to see if I would take the plunge. The pressure was on and in the end it would have been more embarrassing to give up and retreat with my tail between my legs than to bite the bullet and jump.

I now understand how the Tarzan yodel was invented. Mine of course was a very high pitched version and very helpful in releasing the pent-up tension from the whole event. Because of the one hundred questions I had asked the safety officer in the twenty minutes before I jumped, I had a good idea of what to do when I finally got to the other side and I’m proud to say that my brain retained the information and complied beautifully. I did not miss and swing back. I succeeded in grasping the rope on the other side, rather ungracefully I might add, but I’m sure you already pictured that. There’s a possibility that some smarty pants filmed the ordeal and it’s floating somewhere on YouTube. Do let me know if you come across it.

Little did I know things would get tougher ahead. I got to the netted ropes which didn’t look too bad until I was a quarter of the way across and my arms were burning with fatigue and I thought there was no way I was going to make it all the way. My screams of ‘get me off! I can’t do this anymore!’ went unheard. I was up high and there really was no way of turning back. I hooked my arms and legs through the net and decided I was just going to hang there and get the safety officer to get me down somehow, but the ropes digging into my flesh was just as unbearable. I heard my children cheering me on, telling me I could do it. I screamed over to my boys, ‘Get over here and help me!’ Through my peripheral vision, I realised they were in hysterics and had no intention of coming to my rescue. There was the urge to sob in self-pity when I had to admit, to myself only of course, that I was a legend only in my mind. Ah, the cruelty of aging, where the mind is willing but the body is weak. I pulled myself together and inched my way painfully and slowly to the other side. That day I also discovered that I could walk like an ape and camouflage my groans of agony by pretending to be an ape. You need to get a visual of that one.

I had to conquer fear with the Tarzan swing and exhaustion with the net. Although both were mentally and physically challenging, I found conquering the fear was much harder than overcoming the fatigue. Both required a strong will to get through it, but I found getting the fear under control was much harder. Another challenge that I found particularly difficult was having to step across loose swinging logs at a very great height. The logs were too far apart to reach them by stretching out my foot. I needed to jump across and use my arms to lean on the wires for support. It took me about five minutes of psyching myself up to finally take that first step. Unfortunately, once I’d taken that first step, there was no turning back and there were another twenty or more steps ahead!

All up, once my body recovered from the shock, I acknowledged that it was a fantastic experience. Although I’d found it very challenging I went back for more! Three and a half hours later I could barely walk. I was completely spent. I thought about the experience and how similar it is to our life experience. We can be faced with challenges that paralyse us with fear and make us procrastinate to avoid the pain we perceive ahead. We can choose to give up and stay in our comfort zone, or in some cases uncomfortable zone, and retreat rather than face the fear. Or, we can make a change in our life by taking a leap of faith, knowing it won’t be easy, but we will come out the other end a much stronger and confident person. Through these challenges, we may run ourselves to the ground until we are too exhausted to continue and then choose to throw in the towel, or we can rest a little when things get too tough and then persevere until we make it through. We can convince ourselves that something’s too hard and make excuses as to why we can’t do it. We can find ways to retreat and give up, or we can feel the fear and exhaustion but choose to move forward knowing that we will come out the other side a much stronger person and proud of our achievements. We fail when we stop trying! 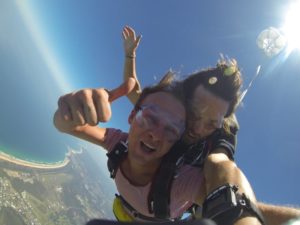