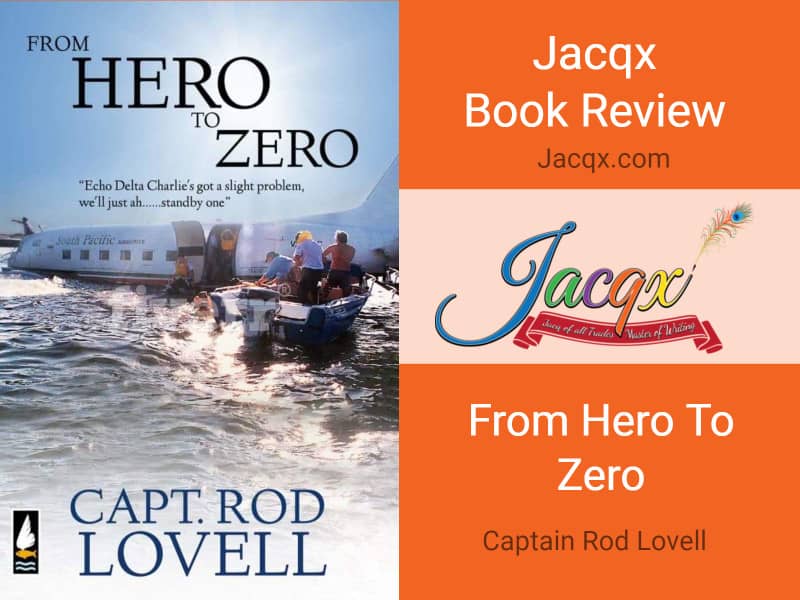 From Hero to Zero is the incredible, true story of Captain Rod Lovell’s unbelievable castigation for doing the very thing he was paid to do – keep his passengers safe.

Imagine being punished for saving lives? Imagine if you only had 46 seconds to save those lives. Imagine if it was one of your loved ones whose life was spared. Would you not hail the man who saved lives a hero? The Australian media and public embraced Captain Rod Lovell as a hero. The aviation authorities brought him down to zero.

Captain Rod Lovell was punished by having his pilot’s licence suspended even though his outstanding skills enabled him to successfully ditch an aircraft in Botany Bay, Sydney, on the 24th of April, 1994 without fatalities or serious injuries. What is even more remarkable was that he did this with only 46 seconds to spare. The post-traumatic stress Rod suffered after the accident was not related to the accident itself. It was the bully tactics and injustice he suffered at the hands of the aviation authorities over the following years. Rod’s attempt to get an accurate report and clear his name through the courts proved futile and left him financially and emotionally drained. As Rod explained in his book, the Australian government spent millions training him as a RAAF pilot, only to suspend his licence twenty-two years later, deeming him unfit to fly stating that the accident was due to ‘pilot error’, rather than a faulty aircraft.

From Hero to Zero takes you on a journey that begins with Rod’s childhood dream of becoming a pilot even though the odds were stacked against him. Rod’s passion and persistence ensured he found a way to realise his dream. The farm boy worked his way from his first job in a linen laundry company to garbage collector, and motor mechanic, before becoming a Royal Australian Air Force pilot and a Captain. Rod shares his many adventures along the way, including his successes and failures, and ultimately the day that forever changed his life when he was at the height of his career.

It was a privilege, as Rod’s editor, to be invited to his rather special book launch held onboard a boat. We enjoyed lunch and a From Hero to Zero book cover cake as we cruised to the ditching site where South Pacific Airmotive took its final flight twenty-five years previously in Botany Bay. It was an emotional experience listening to the speeches made by some of the survivors. Particularly interesting was the speech given by Cameron Mackintosh, who was seventeen at the time of the accident.

Cameron described the incident in a nonchalant way. He stated that as a seventeen-year-old, he was convinced that flying was one of the safest methods of travel. So, he and his school colleagues had little concern when shortly after take-off the boy sitting beside Cameron pointed at the window to flames coming out of the engine. He recalls being fascinated rather than concerned. Considering 46 seconds afterwards, they had already ditched into the water; he had little time to reflect on the situation or time to panic. Seconds after impact orders were given to don their life jackets and exit the aircraft.

‘We made our way outside the aircraft and had to jump into the water and swim a short distance to boats which were positioned close-by. I was taken aback by the photographer, who was the first to push his way out of the plane, after impact, and was then taking photographs of us exiting the sinking plane. I thought that was a bit heavy.’

Cameron’s mother, Roslyn Mackintosh sent Rod this letter on the  29th of April 1994; five days after the accident:

I have not met you, but I am writing this letter to try and express my gratitude to you for bringing my son, Cameron, to safety last Sunday in Botany Bay. It is impossible to put into words how I felt about it, but I am sure that your skill and presence of mind are the main reason why we have Cameron today. We were incredibly lucky that you were in charge and I will never forget the feeling of relief and gratitude. I thank you most sincerely. On behalf of all my family.

From Hero to Zero is a fascinating book regardless of whether you are an aviation enthusiast or simply like incredible true stories. Rod’s thorough research in his quest to find the truth behind why both engines failed will leave you better educated and informed of actual facts from the person who lived them. Rod’s extraordinary, true story will make you laugh, cry, and stir you to anger at the injustice he suffered for doing his job with excellence. The best way to right a wrong is to spread the word by writing a review and recommending From Hero to Zero to as many people you can so that Rod’s status can revert to From Zero to Hero and his name cleared of all wrong doing once and for all.

The morning of his book launch, Rod was invited to appear on Weekend Sunrise where presenters, Monique Wright and Matt Doran interviewed him. Click the link or images to view the television recording.

You may purchase your copy of From Hero to Zero here: Purchase price is $29 plus $9 for postage for up to 2 books.

Do you have an incredible story you would like to see in print? Contact me to discuss your project and begin the journey of leaving behind a legacy.